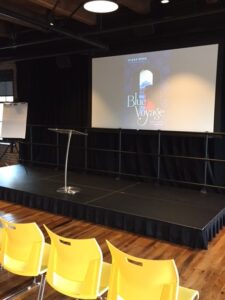 BLUE VOYAGE launched yesterday, and I had the first of two release parties! This was the Afternoon Edition, held at a new bookstore in Plainville, MA called An Unlikely Story. Plainville is a small town about an hour’s drive from Boston, and it’s recently been on people’s radar because of An Unlikely Story.

I was thrilled to make this road trip because this shiny new bookstore is getting a lot of great buzz. It was created by local author Jeff Kinney (yes, that’s the one — of Wimpy Kid fame!). You can read a great article about the store’s inception here — it’s a fascinating account of how a derelict building was repurposed for this outstanding bookstore / community hub, and how a bookstore can potentially transform a community.

My son is a HUGE Wimpy Kid fan, so when I suggested taking him out of school and coming to this after school release party with me, he didn’t raise any objections! We had no guarantee that Jeff Kinney would actually be there — it can be hit or miss, say friends who have done events there — but I thought even seeing this place Jeff had created would be a great experience for my son.

We pulled up to a beautiful multi-level building with gleaming blue paint and inviting signs. Inside, the cafe on the ground floor was humming. Books (for adults and kids alike) were attractively displayed. My son and I had time to do a little shopping and pre-ordered Jeff Kinney’s new Wimpy Kid book.

We then went upstairs to the event space, a grand hall with gleaming hardwood floors, exposed beams (salvaged from other buildings, I’m told), a kitchen space, a stage, a professional lighting and A/V system, and a disco ball!

I had just laid out a table with Turkish Delight candies and cupcakes when the owner himself, Jeff Kinney, came in and introduced himself! He exists! He’s human! He’s super nice, just a regular guy! He ate some of my Turkish Delights! 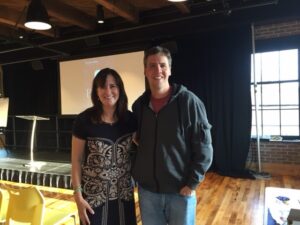 My son was awed enough to put aside Minecraft on the iPad and meet him. Jeff posed for a picture with him and signed a book, drawing a couple of special pictures! We watched him draw the circular head of the wimpy kid – I’ve never seen anyone draw such a perfect circle! 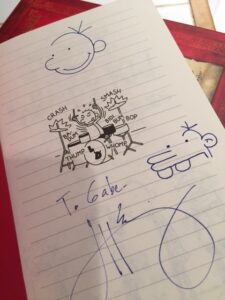 Jeff stayed for my whole talk and asked questions right along with other people during the Q&A session. I had such a fun time talking about the stories behind the book and finding out what interests people about it. My books seem to attract people who love to travel (go figure!) and it was great to hear about other people’s travels and dream destinations. Also my dear friend and critique partner Erin Cashman came; it was wonderful to have her there since she was so supportive of me during the writing of Blue Voyage! (That’s not her in the picture below, though; that’s the events manager  . . . Erin, I’m sorry we neglected to get a picture of us!) 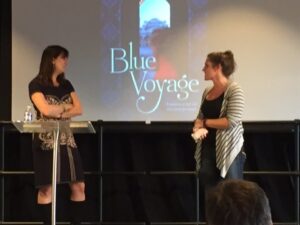 After the event, my son and I went downstairs where I signed some more books. There is now a nice stack of signed stock there, of all three of my books, and the store does ship, so if you want one, contact the store and let them know! 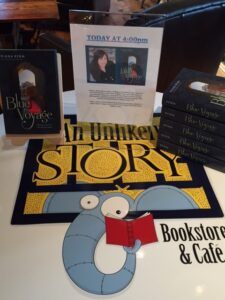 I got to sign this cool guest book for the store, too. It was a guest book made by Peter Reynolds, another author/illustrator/publisher/entrepreneur, who owns the Blue Bunny Bookshop in Dedham, MA. It was fun to see this book — I’m also a Peter Reynolds fan, having done several events at his fabulous children’s bookstore (where I also spent way too much money) and we own many of his books in our house. Other visiting authors at the store have signed this book for Jeff. It was fun to see who else had come! 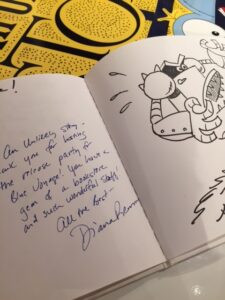 Then I bought a Wimpy Kid book in Latin, because, well, just because. You gotta have one. 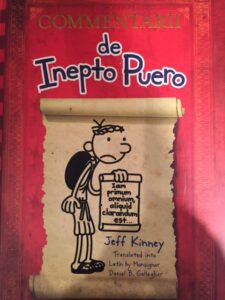 I hope more authors go to this wonderful new store for events; I can’t recommend it enough. And if you’re in New England, please don’t pass up the chance to check out this special store — I promise it’s well worth a road trip!

What I love best about indie bookstores is their community-building spirit. This was a fun place to connect with readers, and I can’t wait to come back!