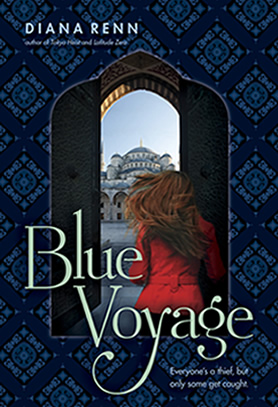 An intricately crafted mystery set in the contemporary Middle East.

Zan is a politician’s daughter and an adrenaline junkie. Whether she’s rock climbing or shoplifting, she loves to live on the edge. But she gets more of a rush than she bargained for on a forced mother–daughter bonding trip to Turkey, where she finds herself in the crosshairs of an antiquities smuggling ring. These criminals believe that Zan can lead them to an ancient treasure that’s both priceless and cursed. Until she does so, she and her family are in grave danger. Zan’s quest to save the treasure—and the lives of people she cares about—leads her from the sparkling Mediterranean, to the bustle of Istanbul’s Grand Bazaar, to the eerie and crumbling caves of Cappadocia. But it seems that nowhere is safe, and there’s only so high she can climb before everything comes tumbling down.

Published by Viking/Penguin. Now available at these bookstores:

Latitude Zero (2014)
A children’s TV show host and avid bicyclist travels to Ecuador to unravel the mysterious death of a fellow young cyclist.