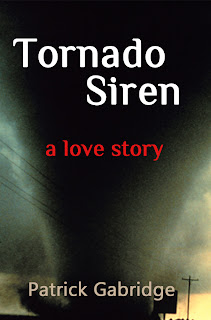 The title of today’s post expresses my great hope for this thrilling and thoughtful novel. The exciting whirlwind of ebook publishing now brings us TORNADO SIREN, by Patrick Gabridge. Originally published by Behler Publications in 2005, it has just been re-released as an ebook, and is now available for Kindle, Nook, and other formats (via Smashwords). In fact, Smashwords featured it as a special promotion for “Read an e-Book Week” earlier this month.

I’m a big fan of contemporary, realistic fiction, and make only occasional forays into the realm of the paranormal. In that respect, TORNADO SIREN is the perfect read for me. The book feels grounded in reality, as the day-to-day work of tornado researcher Victoria Thomas is described with fascinating precision. Victoria’s personal issues, as a busy, thirty-something scientist with little time for relationships, also feel quite real and compelling. And the details of life during and after a tornado are vividly painted. I’ve never seen a tornado in real life, but I could really feel the terror of watching a storm approach, or hiding while a storm rages, or waiting for help after being buried in rubble. So there are numerous anchors to reality in the novel, but the tornadoes whose path of destruction Victoria charts — and the mysterious man and his dog who sometimes accompany them — quickly swept me away into a highly imaginative storyline.

Ben Fulgar and his dog, Kimat, seem otherwordly as they defy the rules of nature. How can they walk away from the most violent storms, unscathed? How can they have existed for centuries yet fail to show signs of age? Yet the man and his dog also appear to be of the earth itself, gaining a strange power from the storms that seem to seek them. Victoria finds her rational perspective challenged as she first follows their tracks, and then accompanies Ben and his dog on a long trek across Kansas. Seeking answers, she finds love. However, more complications follow, including the logistical and moral dilemmas of how to be with a man who lives outside the basic rules of society and who attracts such destruction. (Sure, any relationship has its challenges, but try dating someone who needs to sleep on the bare earth instead of a bed. Or who lures a tangle of deadly twisters directly to his doorstep).

Gabridge is both a novelist and a playwright, and he brings to this novel the playwright’s ear for great dialogue and a talent for careful pacing. He does not shy away from emotional scenes, and the romance storyline is poignant. The book is both thoughtful and thrilling, combining a rational scientist’s concept of reality with the energy and danger of deadly storms. It’s a quick read, making it especially suitable, I think, for an ebook format. Read TORNADO SIREN. Get swept away. Enjoy the ride.