TOKYO HEIST has a cover! I’m so happy to be able to share it. Here it is! 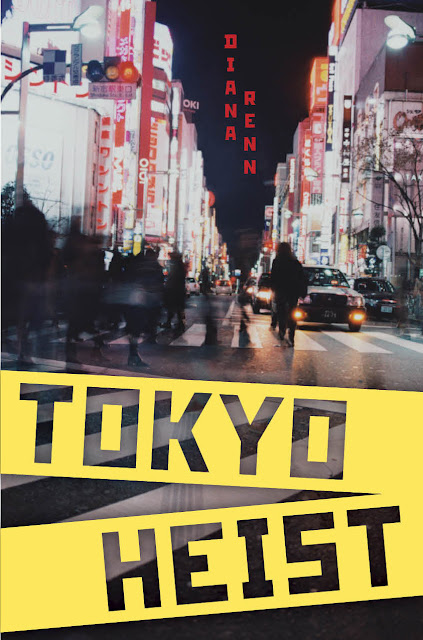 I couldn’t be happier. Japan, especially Tokyo, features prominently in the novel, so I’m glad the city is featured here. I love the glow of the lights, the shadowy figures, and the crime scene tape. The cover artist just nailed it.

Here’s a summary of the book, also now up at GoodReads:

Sixteen-year-old Violet loves reading manga and wearing scarves made from kimono fabric, so she’s thrilled that her father’s new painting commission means a summer trip to Japan. But what starts as an exotic vacation quickly turns into a dangerous treasure hunt. Her father’s client, the wealthy Yamada family, is the victim of a high-profile art robbery. Someone has stolen van Gogh sketches from the Yamadas’ Seattle mansion, and is holding them hostage until the Yamadas can produce the corresponding van Gogh painting. The problem is that nobody knows where this painting is hidden, and until they find it, all of their lives are in danger.
Violet’s search for the missing van Gogh takes her from the Seattle Art Museum, to the yakuza-infested streets of Tokyo, to a secluded inn in Kyoto. As the mystery deepens, Violet’s not sure whom she can trust. But she knows one thing: she has to find the painting and the criminals—before it’s too late.

Other news: the book has gone to copyedits, and I have a publication date of June 14, 2012!

Here to help celebrate is the TOKYO DANCE TROOPER IN SHIBUYA. He totally captures my happy mood today, and this is a fun glimpse of Tokyo! (Thanks to my Apocalypsie sister Kathleen Peacock for bringing this to my attention!)

I’ve been absent from the blog these past few weeks, but for good reasons, I swear. Mainly, I was finishing up line edits/final revisions to my novel. These revisions coincided with yet another family vacation. Fortunately, this one was a visit to family in Seattle, so I had a team of people available to look after my son and give me some much-needed chunks of time. Everyone was extremely understanding about this situation, and more than patient with me as I frantically went into last-minute brainstorming mode about such things as knives and twine (reworking a climactic scene) and other issues.

Mostly, I worked odd hours here and there, and and very early in the morning, taking advantage of my four-year-old’s jet lag. I also worked a little in a remote lodge on Mount Rainier, where we spent a weekend. There’s nothing like mountain air to clear your head! Ideas and solutions came easily to me at 5,400 feet, without the distractions of television, Internet access, and social media.

Miraculously I scavenged enough time to get the job done. In the airport security line, leaving Seattle, I got an email from my editor. Revisions accepted; the book is off to copyediting! The production process has begun. The words “you are ALL DONE” were incredible to behold. I’m still in a state of disbelief.

Near the end of our Pacific Northwest sojourn, I received another bit of exciting news, in a serendipitous way. We went on a day trip to Port Townsend, on the Olympic Peninsula. I haven’t been to Port Townsend since high school, when I attended a creative writing camp which run by CENTRUM. CENTRUM (the arts organization, not the vitamin) literally changed my life back then, helping me to reconnect with my childhood ambition of becoming a writer. I met like-minded kids, worked with professional authors, and became, in that magical week, determined to write for a living someday. So two decades later, here I am returning to that site, and on the ferry boat I receive a magical message from my editor. A JPEG of my book’s cover art.

It was a very emotional moment. It’s been a long journey. At 18, I never would have imagined I’d someday return to the CENTRUM grounds, staring at an image of my book cover (on an invention called the iPhone, no less!)

And the cover art? Soon to be revealed! Very soon! All I can say right now is I love it so much, I gazed at that little image on my phone for the entire ferry ride, missing all the scenery around me.

More excuses for being missing in action on the blog: