Welcome to the first top of The Cemetery Trail!

This is the first ever Halloween Book Trail, featuring your favorite YA & MG authors! This blog hop is based on the YAmazing Race with MGnificent Prizes presented by the Apocalypsies in 2012. In THIS trail, you’ll find all kinds of posts, and discover new authors and their work.

How do you play? Every post contains information that will lead to killer prizes! Books, swag, Skype sessions, locks of hair (jk, jk)! At the end of each blog you’ll find a link that will take you to the next stop in the trail. By the end, you’ll find a quiz. Now you’ll be happy you read all the posts! Submit your entry to the quiz for a chance to win a grand prize! Accuracy matters here, so take your time, or go back and refresh your memory! One quiz entry per trail.
And thus ends the standard introduction to the trail that you will see at every way station on this trail.

If you’ve stumbled across this post in error (or in horror) and have no idea who I am, here’s a bit about me! 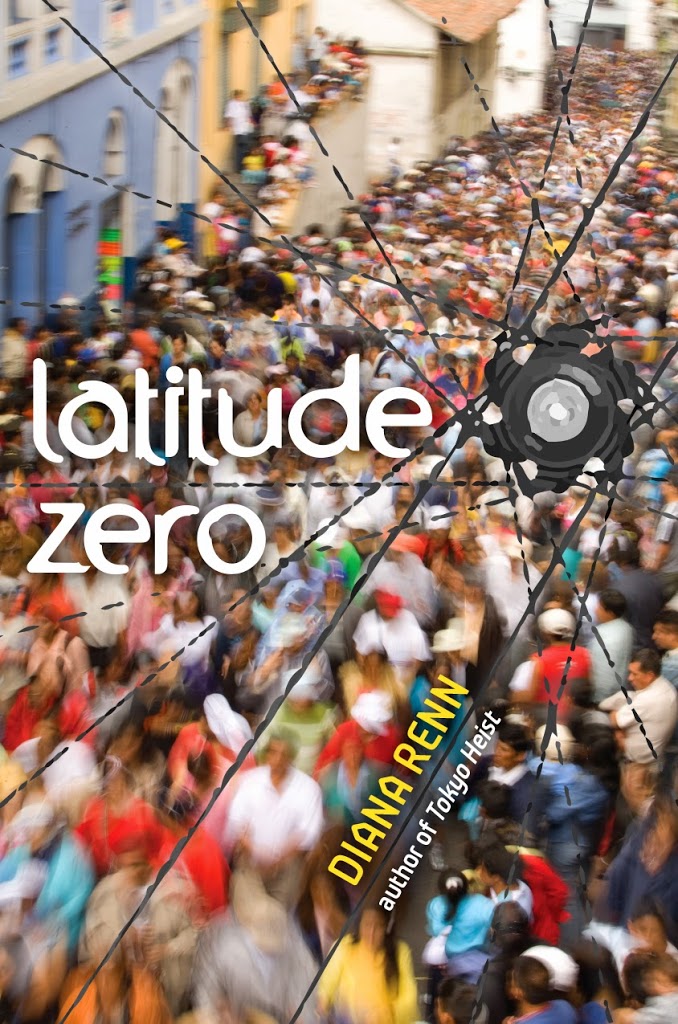 I write YA novels featuring globetrotting teens and international intrigue. I guess you could also call them travel mysteries. My first book, TOKYO HEIST (Viking/Penguin, 2012) is about a teen manga fan who goes to Japan to hunt down some missing van Goghs, and gets entangled with the Japanese yakuza in the process.

My second novel is an investigative thriller called LATITUDE ZERO (published in July of this year, also by Viking/Penguin). It’s about a girl named Tessa Taylor who causes a massive bike crash on a charity ride while “bandit riding” with her bike racer boyfriend. The crash leads to the death of a hot young pro-cyclist from Ecuador, whom she happens to know because he and her boyfriend once raced on the same team. Tessa struggles with grief and guilt  . . and then finds some clues that suggest the cyclist’s death might have actually been a murder, caused by somebody else. Going undercover as a volunteer for a bicycle advocacy group, Tessa travels all the way to Ecuador to uncover the truth. With the help of her bike mechanic friend, Marisol Vargas, she races to solve the crime before she becomes the next victim.

My third book, BLUE VOYAGE, takes place in Turkey, and will be out Fall 2015.

And now, for my Halloween-themed post to kick off the Cemetery Trail!

No pressure or anything.

Okay. I confess. I may not be the best person to kick off this blog hop. See, Halloween and I aren’t really the best of friends.

We have Issues. Big Issues.

As far back as I can remember, I was the queen of Lame Costumes. Costumes that somehow missed the mark, elicited confusion, or inadvertently caused bodily harm to others.

When I tried to make my costumes out of stuff around the house, or cardboard, they ended up falling apart as soon as I got out the door. The year I was an owl, all my magnificent paper feathers fluttered off my Hefty bag skin, leaving a trail of construction paper and a kid dressed up as, well, a Hefty bag. Another year I was a gypsy, with a crystal ball that promptly shattered, and since it was cold that year and I wore a ski jacket, I just looked like a kid in a ski jacket.

When I tried to accessorize, I chose poorly. One year I was a hobo. I wore a tattered sports coat, baggy pants, shoes with split soles — all good — but I carried my trick or treat bag, a kerchief, tied on the end of a fishing pole. This pole then stabbed people in the face or eye every time I said “thank you” and turned to go. One elderly man lost his eyeglasses because of my hasty move with said pole.

“So what are you supposed to be, anyway?” people asked me at a sixth-grade party, puzzling over my white tunic and cape and white face makeup. I think I was Indecision that year, torn between ghost and vampire, fusing my two ideas last-minute and pulling off neither one of them.

Meanwhile, my younger sister was the Halloween Queen. She had the most creative ideas. Like a robot that actually had a circuit board that lit up, which she actually engineered herself at the tender age of six. Another year she was a eucalyptus tree, wearing her koala backpack. She emitted a vague eucalyptus odor, and I believe she had healing properties and could stop coughs from ten feet away. Another year she and a friend went as half-cheerleader, half-football player, each of them vertically divided from their face makeup all the way down to their footwear. She thought of the best disguises and pulled them off effortlessly.

As I got older, my costumes only got worse. I gave up Halloween for a bit in high school, after a disastrous experiment with red food coloring as hair dye (think blood dripping down face). Then I tried again in college, at a party. “So what are you supposed to be, anyway?” people asked me. “A Shadow of my Former Self,” I replied, feeling abstract and witty as I fluttered my gauzey sleeves. I guess a bunch of people dressed up as Blank Stares that year, because that’s mostly what I remember.

I have, however, come to realize where I am best at the art of disguise. Not on Halloween night, but in the pages of my books. I think I had the most fun in coming up with costume ideas in LATITUDE ZERO, where my heroine must go undercover and dress to avoid attention from spies and stalkers. Most of the time, she’s successful, even when she has to plunder Ecuadorian crafts markets and her host family’s closets to find clothes to alter her appearance. I’ve come to realize I really do love the art of the costume, but I’m best without the pressure of one night a year to pull out all the stops — and I’m better at using words to dress up my characters. This realization has taken the pressure of Halloween off of me, after all these years.

Well, almost. Because now I have a child, who starts planning for Halloween in April, and who’d love for me to make him a home-made costume. But I know better. I will not inflict the same curse of the costume on my offspring. That’s why I order his costumes from Target.

For the next stop on the Cemetery Trail, visit KATLYN DUNCAN, at http://katlynduncan.blogspot.com/2014/10/HBT14.html