When art and life collide 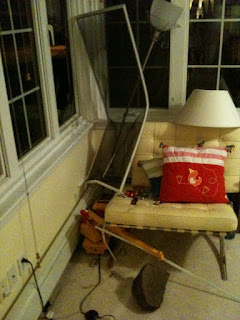 Occasionally, art and life collide. Freaky coincidences happen. Sometimes that’s cool. But not when it involves a rock flying into your house at 2 am. Which is almost exactly what happens to some characters in the novel I’m busy revising. And which is exactly what happened to me last night.

I’ve written a mystery, and plenty of mysterious things happen in my plot. I’ve chortled over clever plot twists and anguished over plot-holes. I’ve had fun ramping up suspense and having spooky things happen around my main character, especially in the beginning of the novel. Among the fictional events that take place: an art heist, involving a rock hurled through a window, and a house hit by vandals, also involving a rock through a window.

The rock that flew out of fiction and through my actual window (which may cost a real sum of around $1,000 to repair) was nothing to chuckle over. It scared me to death. My husband and I awoke to a crashing sound, which, groggily, I assumed was a gigantic bin of my son’s Legos capsizing downstairs. After a few minutes I decided to go pick them up, since our cat has a plastic obsession and I didn’t want her eating the little ones. Only when I got downstairs did it occur to me: my son does not own a gigantic bin of Legos.

Indeed, his tiny tray of Legos was intact. I wandered into the playroom (an attached sunroom, all windows) to see what might have fallen from a shelf. And saw the rock. And the mangled screen. And the jagged shards of glass glinting in the moonlight, in the window frame and all over the floor. And the cat staring at me with wide yellow eyes.

My husband called the police, who promised to send someone over. By 2:40 am, no police had arrived. It was a tense forty minutes. Outside has never looked so dark. Were we being watched? Had we been targeted for some reason? (Paranoia: did someone read a recycled draft of my novel in the trash and decide to reenact the very scene I was revising?) My husband switched on the TV, and everything on it seemed to be about violence or crime. We called the police again. They said we were one of eight such incidents and they were slow in coming over. Somewhat relieved that we were the victim of some sort of spree, probably not a single target, we decided to have them come check it out in the morning, and we went to bed.

And did not sleep. I had a taste of real fear, the emotion I was trying to fabricate in my characters but hadn’t exactly nailed. I couldn’t stop picturing that big ugly rock sitting on the white rug in my son’s playroom, like a ghastly intruder with body odor and bad breath. Oddly, a part of me detached — my writerly mind — and thought, I have to get to my computer and write all this down! This so relates to my book! But I didn’t really feel like sitting by a window.

In the harsh morning light, I didn’t feel scared. I felt violated. Glass frosted my son’s bookshelf and toys. His favorite toy, a big construction crane, had been broken. He burst into tears. We had to explain to a four-year-old how this had happened. He didn’t buy our story about the big wind blowing the window out, especially when he saw the rock on the floor. Later, when we found an abandoned skateboard in the bushes by the window and a policewoman carted it away for fingerprinting, he seemed to put the two together. “I think a big mean boy on a skateboard threw that big rock into my playroom and broke our house!” he exclaimed.

I felt outraged. A little part of his innocence was shattered. He now knew he lived in a world in which a rock could come hurtling through a window.

Information unfolded throughout the day. We were one of 19 or more such incidents that took place in the middle of the night. Likely kids on a spree, bored at the tail end of Spring Break. But not the kind of thing you usually find happening in our pleasant, quiet, suburban town. A mystery. A real one. And it wasn’t very fun.

The rock through my window made me think about how lucky we are that it wasn’t a worse situation. No one got hurt. The window can be replaced. The lamp and toys can be replaced. There are more violent and terrifying events in mysteries, both fictional and real. I do now have a glimmer of insight into how the victim of a crime would feel, and I will write with even more empathy going forward. I will endeavor to capture the conflicting emotions I felt, and portray the sense of fear and violation more accurately. Especially the after-effects of the crime. The way the emotions return throughout the day. Or the way you drag the event around you like a soiled blanket, and trip over it from time to time. The way you dread the day ending because the dark will return and you won’t feel as safe as you did before. The way you’ll check on your child twice.

Writing can generate empathy. So can reading. I hope the young vandals who went on this senseless spree pick up a book sometime and get a little empathy of their own. 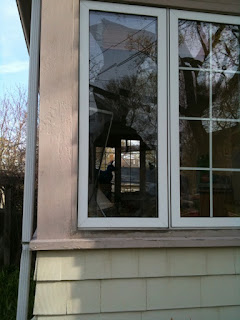