Today my 5-year-old drew this picture for me on a white board: 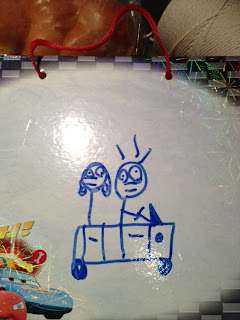 “They look startled because they’re about to be erased,” he explained.

My son is normally quite sensitive about anything dealing with finality. Deflated balloons, dead flies on a windowsill, even a withered leaf can bring tears to his eyes. So I was surprised at his matter-of-fact tone.

“Where do you think these characters will go, after they’re erased?” I asked gently, bracing myself for the emotions around the corner. “Maybe back to Idea Land? Where they came from?”

Idea Land! Yes! A place where half-formed thoughts and two-dimensional characters could run around dead ends or play jump rope with tangled-up plotlines! Cast off characters — from different chapters, even from different books — could all meet up and hang out. Surely that’s where these stick figures were going in that car — and no doubt they’d run into countless abandoned relics from the novel I’m now revising. I let myself drift into this fantasy for a moment. The scenario appealed. Sometimes it’s hard to let go.

My son snapped me out of my reverie. “No,” he said. “They get devoured.”

“By the eraser, of course.”

I had just a moment left to snap this picture, and then these guys were gone.

I missed them. But minutes later he’d drawn a better picture.

I wished I could hit my delete button as boldly as he swiped that eraser. Sometimes I cannot simply cut — I have to retype completely, conjuring everything up again, and not thinking about what I’m lost. I’m always happier with the result. It’s the anticipation before the cuts that feels hard.

Do you cling to old ideas — saving them in a file, printing out scrapped pages? I do this even though I may never look at those files or pages again. I like just knowing they are there. Other writers are more ruthless.

How do you make peace with cuts when you’re revising?