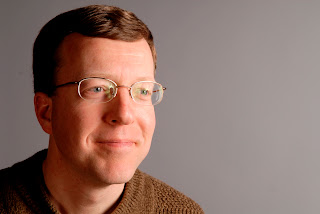 I’m honored to be the first stop on Patrick Gabridge’s blog tour today. Patrick is a “triple threat” writer — a novelist, a playwright, and a screenwriter. His paranormal novel Tornado Siren — a love story about a tornado researcher and a man with an unearthly connection to tornadoes — was published by Behler Publications in 2005; it’s now available as an e-book for Kindle, Nook, and other formats (via Smashwords). As an award-winning playwright, he’s had numerous short and full-length plays produced nationwide, and he is a Huntington Playwriting Fellow at Boston’s prestigious Huntington Theatre Company. (That’s a big deal, folks — they only pick three every two years). The newest anthology of his plays (Collected Obsessions: Eight Short Plays of Captivating Lunacy) has just been released by Brooklyn Publishers and Heuer Publishers. And  . . and . . . and . . .

Wait, I have to stop and catch my breath. And this is only a snapshot of his numerous writing accomplishments. Maybe I should stop writing his entire biography and just get to the interview? For a full list of his publications and productions I’ll refer you to his comprehensive website.

I’ve known Patrick for years as a fellow writing group member and a friend, and I’ve long admired his time management skills and his incredible productivity. At any given time, he is either drafting or revising a play and has at least one in production. He also has completed several novels within just a few years, and is embarking on a new one. He runs three successful blogs. And he actually has a life. So I thought I’d introduce him to you, and see if he’d share some of multitasking writing secrets with the world. Check out his photo above — yes, he always looks that calm. Yet he is a whirlwind — dare I say a tornado? — of activity! How does he do it all and still keep his feet on the ground? Let’s find out! Welcome, Patrick!

I think of you as a Master of Multitasking. You write novels for adults and children, stage plays, screenplays, and radio plays (audio drama). You have multiple projects going on at any given time, in various stages of production. And you have a family! How do you juggle these various projects and genres? (And what is the secret to your amazing productivity?)
I love writing, and I love having my work reach an audience.  It’s never a chore for me to sit down and work on a project, and I can get a little antsy if I’m not actively creating stories/characters on a regular basis.  When I hear my work in front of an audience, or get feedback from readers, that spurs me on, too.  I end up involved in a lot of different, projects not because I get bored easily, but because I get interested easily.

I do a lot of planning when it comes to writing projects—at the start of every year, I’ll take a couple days and write down a detailed plan for all my upcoming projects and where they’re going to fall during the year.  This schedule shifts and slips constantly, but it gives my writing life some structure.

What does a typical writing day look like for you?
It varies, depending on the project.  I’m most productive when I set aside a block of 3-4 hours in the morning for writing.  I’ll try not to turn on the internet or check my e-mail for that time.  Once those hours have passed, then the rest of the world is allowed to come in, and the million different distractions come flooding in.  But if I actually sit myself down for a chunk of 3 hours, I get an enormous amount accomplished.
Do you ever get “stuck” or “blocked” in a writing project? What do you do when that happens?
I’m careful to avoid the word “blocked,” but I do get stuck sometimes.  When that happens, I  either work through it, or put the project aside for a while.  Sometimes working through it is a losing battle, because I become increasingly frustrated and that makes finding a solution harder and harder.  That’s when there’s an advantage to having multiple projects going.  I might set aside a novel and go work on a play for a while.  This makes the process of finishing any particular project take longer, but I get more done in the aggregate.
I’ve been doing this long enough to recognize that I don’t always solve every problem in every book or play.  Sometimes the problem is beyond my current skill level to fully solve, and I have to accept that the piece is as good as I can make it right now.  Perfectionism is the enemy of achievement.
As if you don’t have enough writing to do, you also run three excellent blogs: a blog about the writing life, a blog about going car-free in Boston, and a blog about urban gardening. How do you budget time for blogging? What do you find challenging and rewarding about blogging?
My time to work on the blogs ebbs and flows.  Lately, I’ve been so busy on other writing projects that I haven’t had enough time to write as many thoughtful entries as I’d like.  I’m still able to share with my friends and fans what I’m up to, but I’d really like to be writing more about the state of the writing world.  I have great plans for some interesting posts later this year.

The best part of blogging is when I do write something interesting and all of a sudden the blog post gets a hundred hits in one day.  I love tracking how many people are reading my work (I’m a total numbers guy—I keep track of how many people attend all my plays or read my books or visit my web site).  The instantaneous feedback is a total thrill.

Many of your short plays are written for the youth market, and have been performed at hundreds of high schools and youth theatre festivals. In addition, you’ve mentored young playwrights at the MIT Youth Astronomy Apprentices program. What do you enjoy about writing plays for young adults and working with young people?
The energy and enthusiasm of student actors is completely inspiring.  The funny thing is that I didn’t start out writing short plays for young people, but it turned out that my work for adults offered what students actors needed in competition scripts:  exciting acting challenges that enabled them to show their stuff in front of judges, minimal staging, material that featured genuine human interaction.

The differences between the YA and Middle Grade fiction market and the youth theatre market are very curious.  Publishers of YA fiction define that work as requiring teenage main characters, and often work with very particular struggles around determining self identity.  My theatre work that’s most used by students tends to feature adult characters.  When it comes to playing other people on stage, teenagers don’t want to be confined to characters their own age.  They want to stretch.  For the theatre market, we face constraints on language and actions, mostly due to the public nature of performances (and parents in the audience).  For YA fiction, books can have much more frank language, sexuality, and violence, since reading is a private act.

Several of my plays have been used by students to go very far in national competition.  I strongly encourage students to contact me and let me know if they’ve had fun and success with the scripts on stage and/or in competition.

What are you working on these days? Is there a project you’re especially excited about?
This summer, I finished the first draft of a Civil War historical novel.  I’m forcing myself to let it sit and stew until November, when I’ll try to turn it into something readable (my first drafts can be pretty rough).  I love working on this book.

Some local filmmakers are shooting a short film from one of my ten-minute plays, so I’ll be in helping out with that in October.

I’m also working on Flight, a new full-length play, that my playwrights’ group just read in our Rhombus Readings Festival in mid-September, and it’ll have a reading in New York in February.

In October, I’ve set myself a challenge of writing a new full-length play, while my novel and Flight both gestate a bit.  I have only the vague whispers of a concept, story, and characters.  So this challenge seems nearly impossible to pull off.  Which has me excited to give it a try.

You’re an avid gardener, and I’ve heard a rumor that you’re studying farming. How do gardening/farming feed into your writing life? (Or do they?)
My wife, Tracy, said that farming is a way to keep myself occupied instead of obsessing about the various frustrations of the writing life (the business side, not the creative side).  Gardening/Farming feels like a natural complement to my writing work—it has an intense focus on creation (of vegetables rather than words), and my garden projects all have an aspect of audience—whether it’s feeding our family from our community garden, or a neighbor family through a shared backyard garden, or anonymous neighbors through my 200 Foot Garden Project.  My farm training through the New Entry Sustainable Farming Project over the next few years will expand and improve my skills and knowledge.  I love writing away in my basement office, but gardening/farming provides a sense of balance to my life—it gets me outside, working with hands in the sun.
Imagine you’re having a dinner party and you can invite three guests, living or dead: one novelist, one playwright, and one screenwriter or film director. Who would you invite, and why?
That’s a tough question.  I want to try to sound very serious and literary, but I’d be faking it.  I’d like to have John Green (who wrote Paper Towns, Abundance of Catherines, etc.) because he’s incredibly funny and witty and seems like he’d be really fun.  (I’d also like to hang out with Nick Hornby and Jasper Fforde.  I’d like to meet Camus, but I sense he might be a bit of a downer at a party.) If John Green isn’t available, let’s ask Markus Zusak.

For a playwright, Chekhov would be interesting, except I don’t speak Russian.  Tom Stoppard would be high on my list—he’s amazingly smart.

Screenwriter—definitely Charlie Kaufman.  I’m a huge fan of Being John Malcovich and Eternal Sunshine of the Spotless Mind.  Let’s ask the Coen brothers along. (But I worry they’d mostly talk to each other?)

Can we ask some historical figures to come, too?  If you could invite Robert Smalls, William Tyndale, and Johannes Kepler, I’d really appreciate it.  I’ve spent so much time with them, it would be nice to get to meet them in person.
That sounds like an awesome dinner party; I’ll rustle up three extra chairs for the historical folks. Well, I hear the train whistle calling — you’re off to the next stop on your blog tour. Thanks so much for stopping by, and best of luck with your many exciting projects!

How does Patrick Gabridge find time to hang out online? I’m still stumped, but here’s where he goes:
His website
The Writing Life x 3 (blog)
Choosing no Car (blog)
The 200 Foot Garden blog)
Twitter (@patrickgabridge)
Facebook (come “like” him and you’ll get his cool updates!)

Also, you can follow Pat on the next two stops of his blog tour. You can learn more about Patrick and his writing, and check out these fantastic blogs in the process!
September 29: Lori Foster, On Writing, Living and Loving
September 30: Donna Hoke, My Life as a Wordsmith