It’s been a fun couple of weeks launching LATITUDE ZERO! The kickoff was July 3, publication day. I celebrated with a party at Porter Square Books in Cambridge. I admit, I had some misgivings about throwing a launch party the day before a national holiday, prime vacation time. Misgivings swelled when the threat of violent thunderstorms caused the city of Boston to move its scheduled July 4 celebration to July 3! Now I had to compete with fireworks, the Boston Pops, and the Beach Boys, the headline act of the city’s celebration! Who would choose to spend a warm summer evening at a bookstore when they could be out by the Charles River?

Lots of people, it turns out! Though I couldn’t deliver fireworks or even hum the national anthem, we had great turnout!

I talked about how writing this book was so different from writing TOKYO HEIST, and what inspired it. I read for a bit, and answered some really excellent audience questions. Then I got to sign copies and eat some of that fabulous cake pictured above!

Here are some other pictures from the party:

So I have to tell you about the guy in the third picture, above. That’s Carlos Vivas, a former professional cyclist from Ecuador. (Also a former Mr. Universe winner; he went into bodybuilding after retiring from cycling). I met Carlos after I’d written the entire book, when someone alerted me to the fact that he worked as a mechanic at my local bike shop. I’d been shopping there for years and never knew it! Carlos and his wife Carol both read late-stage draft of LATITUDE ZERO and vetted it for Ecuadorian references, Spanish usage particular to the region, and cycling mechanics. They were incredibly helpful. It was great to hear Carlos’s real-life story of how he came into cycling, and the similarities to my main character, Juan Carlos, were eerie!

After the launch party, my family and I went to Seattle, my hometown, where I did two events: one at Seattle Mystery Bookshop, my favorite mystery-themed bookstore EVER. I spent some time hanging out with Amber, the amazing children’s bookbuyer there, who made sure I left with an armload of reading material for my vacation! (Seriously, Amber is one of the most well-read people I’ve ever met, and you absolutely must check out her Agatha Christie blog, My 52 Weeks with Christie–she’s reading one Christie novel a week!) The other event was at Third Place Books, and my parents were in attendance! I had a lot of fun meeting mystery fans and cycling fans at both stores!

From there, it was on to an actual VACATION. We took the train from Seattle to Portland, which felt so adventurous even though it was only a four-hour trip; I really miss traveling, which can be tough with a small kid, and this whetted my appetite for serious travel again. We then drove to Cannon Beach, on the Oregon Coast.

I spent a few days relaxing there with family, and I finally found time to do a little cycling myself — beach cycling, that is, on the sand! 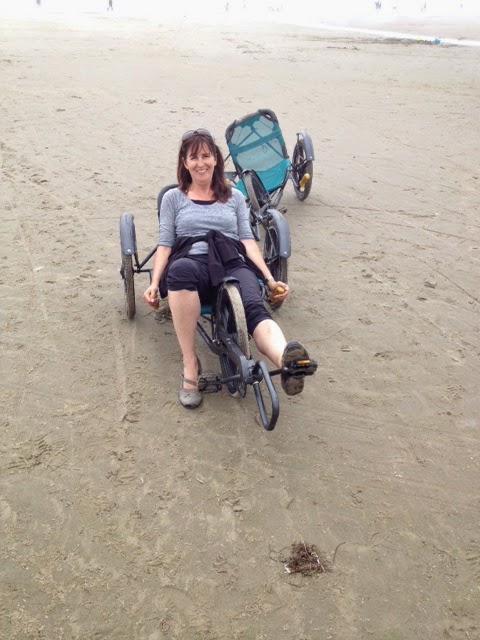 I had never tried this before. It’s a fun low-tide activity to do on Cannon Beach. It was easy enough to learn, but a bit more of a workout than I’d anticipated. Let’s just say I don’t see racing this way in my future! (Nor do I see beach biking as the subject of my next book!)

While on vacation, two rather amazing things happened, proving my theory that if you want good things to happen, get out of town — ideally to somewhere with weak wifi! (And then when you get good news, it will be EXTRA exciting!) First, an essay of mine got published on the Huffington Post. It’s one I’m particularly proud of, about gun violence in YA fiction. You can read it here.

Then I learned that LATITUDE ZERO is a Junior Library Guild Selection!!! This is astounding news, worthy of even more exclamation points than I just gave it. I’ve seen the Junior Library Guild distinction printed on many covers of books I admire, but didn’t fully understand what it meant until I looked at their website. Basically, a committee chooses a select number of children’s titles two seasons each year and licenses hardcover rights for their book club. These titles are then available to thousands of libraries nationwide. It’s a big honor, and I’m so thrilled and so grateful that this book may find a wider audience of young readers as a result.

A big thank-you to everyone who has supported the LATITUDE ZERO journey thus far, whether it’s by attending an event, buying the book, getting it from the library (or requesting it), spreading the word, following my online blog tour, or expressing interest in the book in any way! Everything that readers do helps nudge the book a little farther out into the world!