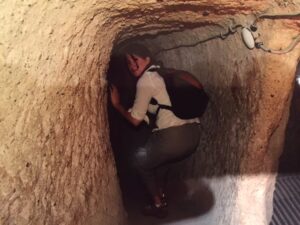 This is me, in a cave in the Cappadocia region of Turkey. This region is honeycombed with caves and tunnels and entire underground cities, of which this is one. Various civilizations took up residence in these caves in ancient times, one civilization eventually replacing another. People lived sometimes eight stories underground, bringing their livestock down with them. This is one of the coolest yet creepiest places I’ve ever been. At least I had a tour guide and a light, and some air, all those good things. In BLUE VOYAGE, Zan isn’t quite so lucky, and she’s desperate to find her way out! I was glad I had experienced the cave cities firsthand and journaled about it later; when I wrote the cave scenes with Zan, I was able to recall the way the walls felt when you scraped against them, the distinctive odor, and the immense sense of claustrophobia. (Notice I’m not exactly smiling in this picture!)
END_OF_DOCUMENT_TOKEN_TO_BE_REPLACED