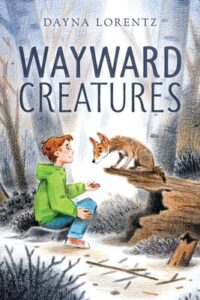 I’m beginning to chip away at my towering TBR pile of amazing new books that launched in the first half of 2022. Dayna Lorentz’s WAYWARD CREATURES came out in January, and while I’d started reading as soon as the book arrived – I’d been eagerly anticipating her new book after I read OF A FEATHER last year — I soon got busy with my own launch preparations and a deadline. I reluctantly had to put my reading on hold.
.
I had some rare stretches of uninterrupted time last week, and again WAYWARD CREATURES called out to me. I devoured it in two days. You guys. THIS BOOK. Wow. It’s about a twelve-year-old boy named Gabe who tries to impress some friends and get attention, so he sets off some stolen fireworks in a woods near his house. This sparks a forest fire! The fire impacts many people and animals, and chars acres of land. One of the impacted creatures is a coyote named Rill, whose voice we get in alternating chapters; he is badly burned and trapped in a crevice, but Gabe discovers him, brings him food, and then advocates for his release after he is captured by wildlife officials. Gabe also makes amends for his actions through his participation in a restorative justice program. The connections between Gabe and the coyote are brilliantly rendered. Both receive negative attention and judgment, especially the coyote who snapped at a small child. Both are angry. Both have disconnected from their “packs” for various reasons. But as their paths cross, and they begin to heal, we learn to view both of them with greater compassion.
. 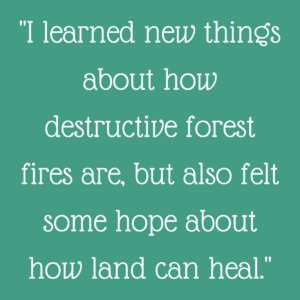 As someone who grew up on the west coast, with an awareness of fires, this story stoked a lot of fears that I have. I learned new things about how destructive forest fires are, but also felt some hope about how land can heal (even soil, beneath what is burned) and eventually may regenerate – especially if humans like Gabe and his community service mentor can nudge things along. Without funding and human effort, though, the process is slow indeed. I also learned a lot about coyotes, creatures I certainly have judged negatively; I hear them at night and fear them when I walk in the woods, but I think I will view them differently now.
.
As the parent of a boy not much older than Gabe in the story, I also felt the family dynamics and the interior life of a seventh grader were spot-on. It’s great to find stories that deal with the inner lives of boys, and even show boys having some meaningful discussions to overcome conflicts and repair damaged friendships. The language felt real, with moments of genuine insight punctuated by awkward humor and fierce ambitions, as Gabe’s friends eventually join him in working toward a common goal.
.
A must read for animal lovers and budding conservationists, as well as anyone interested in restorative justice (which should be all of us) – highly recommend!

I had a lot of fun putting this list together! A new book browsing website, Shepherd.org, has been reaching out to authors and asking us to participate in the building of this site by creating book recommendation lists on a topic we love, ideally connected to one of our own books. This makes perfect sense to me, since I’m constantly recommending books to people, and I read widely and deeply on topics related to books that I am writing. I have at least a full shelf of books for every novel I’ve published. Strangely, after time passes I sometimes forget things that I wrote in those books, but I remember the novels I read along the way, that offered inspiration and kept me company like friends.

I’ve been reading lots of eco-themed books in the past several years, especially this year as I prepare to launch TROUBLE AT TURTLE POND and am intensely working on a book 2.

I also like how Shepherd book lists are short and give a sense of the writer’s personal connections to these books, as opposed to dry summaries – it feels like meeting up with friends at a cafe and hearing about what they’ve been reading if you only have a few minutes to spare. (Which is one of my favorite kinds of conversations, actually! Hi — how are you – but enough about you, what are you reading??)

My post at Shepherd went live today, and here it is! Click on the link below to find out who I’ve been reading! 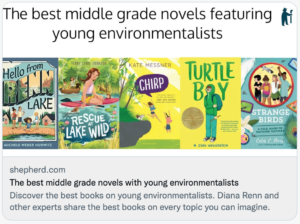